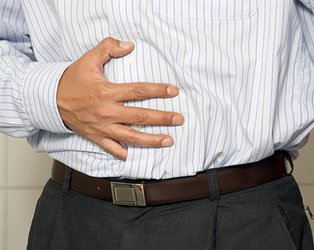 Within 6 weeks, all cases except one were healed. The particle size of the silver oxide was “three-tenths of a micron and smaller.”

The study was conducted by researchers Larry J. Rendin, Carl L. Gamba, and Wallace M. Johnson in 1958, and published in the Pennsylvania Medical Journal. 61: 612-614. It was titled Colloidal oxide of silver in the treatment of peptic ulcer.

Comment: This study was conducted in 1958, long BEFORE it was discovered that many if not most peptic and duodenal ulcers are caused by a bacteria called Heliobacter pylori.

Back then, most stomach ulcers were “cured” by surgery. And as more and more people got ulcers the expensive surgeries became extremely lucrative for doctors and hospitals. So much so that any mention of bacteria as a cause of ulcers was ridiculed and reviled.

Today we know better, of course. Indeed, the most common medical treatment for ulcers is prescription antibiotic drugs along with a Pepto Bismol-type product and stomach acid blockers.

Would colloidal silver do the trick, just as well?

It remains to be seen. To my knowledge, no studies have been done on silver and ulcers since the above-mentioned 1958 study.

But…based upon the above study, and considering the fact that diabetic foot ulcers respond extremelywell to wound dressings that emit silver ions –

– it would seem there’s a pretty good chance colloidal silver might be a powerful natural remedy for this painful malady which afflicts millions of people every year.

What about mixing colloidal silver with Pepto Bismol, and taking it an hour or more before meals, as a means of keeping the silver particles in direct contact with the ulcerated stomach lining longer?

Hmmm. Anybody out there with a stomach ulcer game enough to try it?