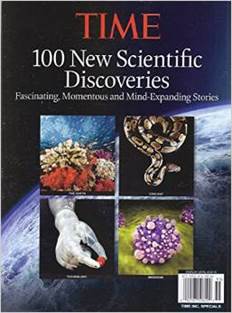 It appears even Time magazine is finally catching up with the times (pun intended), having named the powerful infection-fighting qualities of antimicrobial silver as one of the “100 New Scientific Discoveries” of 2014.

But are silver’s germ-fighting qualities really a “new” discovery? Not hardly. As any experienced colloidal silver user can attest, when used responsibly silver is one of the world’s safest and most powerful natural infection-fighting agents. And the fact that it kills even antibiotic drug-resistant microbes has been known since the late 1970’s.

Nevertheless, here’s what Time magazine had to say about some of the latest scientific research into antimicrobial silver and its profound germ-busting benefits…

Last year, when I wrote the article “Infection-Fighting Silver Gains New Respect from News Media,” I quoted nearly a dozen famous news media sources which had published positive articles on the germ-fighting benefits of silver.

In the course of my research for that article, I somehow missed the fact that Time magazine had also covered antimicrobial silver last year, in its annual special issue “100 New Scientific Discoveries 2014.”

Time reported on new research from Boston University demonstrating antimicrobial silver to increase the effectiveness of existing antibiotic drugs by anywhere from 10 to 1,000 times. (See my previous article on the Boston University research into silver’s often astonishing infection-fighting qualities, here.)

The idea behind the new research is that silver could simply be added to modern antibiotic drugs in order to make them more effective against drug-resistant microbes such as the deadly MRSA pathogen as well as Clostridium difficile and others.

Why Time is Behind the Times

Of course, Time magazine is just a little bit behind the times.

After all, Dr. Robert O. Becker, M.D. had documented the astonishing effectiveness of silver against antibiotic-resistant bacteria back in…drum roll, please…1978. This was during the course of his well-known research at Syracuse Medical University.

As Dr. Becker would later write regarding his research in his New York Times best-selling book, The Body Electric:

“What we have done was rediscover the fact that silver kills bacteria, a fact which had actually been known for centuries…

…All of the organisms we tested were sensitive to the electrically generated silver ion, including some that were resistant to all known antibiotics…In no case were any undesirable side effects of the silver treatment apparent.”

So for Time magazine to name antimicrobial silver and its ability to kill drug-resistant pathogens as one of the “100 New Scientific Discoveries” of 2014 shows a decided lack of understanding of the long history of silver in medicine.

Nevertheless, we have to give Time credit where credit is due, and give them a great big vote of thanks for covering the most recent developments demonstrating silver to be so effective against drug-resistant superbugs that drug-makers now want to add it to their antibiotic drugs in order to increase their effectiveness.

“When it comes to simple solutions to complex problems, we are repeatedly told “there is no silver bullet.” But it turns out there just might be.

New research from Boston University suggests that adding silver to existing antibiotics can make the antibiotics 10 to 1,000 times as effective by interfering with a pathogen’s metabolism and making its cell membrane more permeable to drugs that can kill it.

Silver has been used as an antimicrobial since antiquity (Hippocrates prescribed its use in 400 B.C.) and there has been recent research to determine the effectiveness of silver compounds in treating cuts, burns and wounds…

…The rise of antibiotic-resistant bacteria, such as deadly MRSA and Clostridium difficile, is a growing public health crisis, particularly in hospitals where drug-resistant infections kill tens of thousands each year.

Now, researchers hope that silver can be used as a coating on existing antibiotics as well as incorporated into medical implants to help prevent or eradicate infections that often occur during such medical procedures…”

Thankfully, today, high-quality colloidal silver – the world’s safest and most powerful natural germ-fighter – is available in just about every well-stocked health food store in the United States.

And you can also make it yourself, for just pennies, quickly and easily. I’ll tell you how people are doing it, in just a moment.

But first, if you’d like to learn more about colloidal silver’s astonishing effectiveness against drug-resistant pathogens, here are a few resources you might want to check out:

How to Make Your Own
Micro-Particle Colloidal Silver

A Micro-Particle Colloidal Silver Generator from The Silver Edge allows you to make your own high-quality colloidal silver for less than 36 cents a quart.

Compare that to major health food store brands which usually cost between $20 and $30 for a tiny, four-ounce bottle, and you’ll see that the savings are astonishing.

Do you know of any other health product that literally pays for itself the very first time you use it?

Obviously, having the ability to make your own high-quality micro-particle colloidal silver for only pennies per quart is about as close as you’ll ever get to having “free” colloidal silver for the rest of your life, any time you or a family member, friend or loved one needs it.

And because the silver particles produced by this amazing breakthrough in colloidal silver-making technology are as low as .8 nm – a fraction of a single nanometer – their effectiveness against colonies of pathogenic microbes is astonishing.

Because of their extremely small size, the tiny, submicroscopic silver particles are up to 1,000 times more bioavailable than conventional silver particles. This means the human body is able to absorb 99-100% of the silver, send it throughout the body to kill pathogens, and then excrete it with ease, afterwards.

Plus, it’s now known that these tiny silver micro-particles are able to kill off entire colonies of pathogens with far greater effectiveness than conventional colloidal silver particles, because of the “zombie effect” described in this recent article about brand new research out of Hebrew University in Jerusalem.

Perhaps that’s why so many thousands upon thousands of people absolutely rave over the effectiveness of their homemade micro-particle colloidal silver, as you can see at this web page full of real-life colloidal silver success stories.