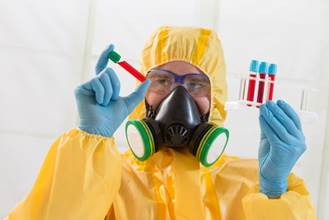 Once again, science proves it’s the silver ion that’s responsible for silver’s astonishing effectiveness against some of the most hardy and difficult-to-eradicate pathogens on the face of the earth.

Below, you’ll learn what clinical researchers discovered when they treated one of the world’s most difficult-to-kill pathogens – Bacillus subtilis – with silver nanoparticles.

This proves once again that ionic silver is the active, infection-fighting form of colloidal silver, and that all other forms of silver are effective only to the extent they release silver ions in the presence of pathogens.

Here’s the story you won’t hear anywhere else…

Although Bacillus subtilis is a relatively benign soil bacteria, scientists know that it’s extremely difficult to kill due to its ability to produce endospores – a kind of “armor plating” which makes the microbe virtually impervious to a variety of disinfectants and toxic chemicals including antibiotic drugs.

Thanks to this “armor plating,” the pathogen is also virtually immune to temperature variations, desiccation, ultra-violet light, and even to starvation since it can go dormant for months or even years at a time, hiding within its tough endospore shell whenever it feels threatened by antibiotic drugs or other substances.

Because of its unusual characteristics, Bacillus subtilis is often used in clinical testing as a substitute for its first-cousin Bacillus anthracis – yes, the deadly anthrax pathogen, which has similar qualities that make it just as difficult to eradicate.

In the above-mentioned clinical study, researchers treated Bacillus subtilis cultures with 0-50 ppm concentrations of silver nanoparticles, and found that while a concentration of only 5 ppm inhibited bacterial growth for 12 hours, concentrations of 10 ppm and higher were lethal to the otherwise difficult-to-kill bacterium.

The researchers found that reactive oxygen species triggered by the release of positively charged silver ions from the silver nanoparticles contributed to the breakdown of the tough “armor plated” cell membrane of the microbe, and that the ionic silver then penetrated the cell membrane and disrupted the integrity of the microbe’s chromosomal DNA causing it to die.

“To the best of our understanding, this is the first study to directly analyze silver particles present within bacterial cells treated with silver nanoparticles, and the results indicate that positively charged silver ions are primarily responsible for silver nanoparticle microbial toxicity…

…our results support the theory that silver nanoparticles exert microbial toxicity through the release of positively charged silver ions that subsequently penetrate into bacterial cells.”

Once again, this is very important to understand:

Instead, the silver ions being released by the metallic silver particles did the killing, first, by releasing reactive oxygen species (much like hydrogen peroxide) that essentially “softened up” the tough outer microbial shell of the pathogen, and second, by penetrating that damaged shell wall, entering the microbe, and binding to its DNA.

This proves, once again, that the silver ion (i.e., ionic silver) is the active, infection-fighting form of silver, and that metallic silver (i.e., silver nanoparticles) is only effective to the extent it releases silver ions in the presence of the pathogens.

Indeed, in one laboratory study the ionic form of colloidal silver was demonstrated to be up to 10,000 times more potent than metallic silver!

How to Make Your Own
Superior Ionic Colloidal Silver

Whether you use colloidal silver to help ward off colds, flu and other upper respiratory infections (learn more, here)…or for more serious and potentially life-threatening infections (see here)…or for its many other healing and immune-boosting benefits (see here)… one thing you likely know for sure is that it’s quite expensive to buy from health food stores.

Indeed, in most major health food stores colloidal silver in the superior ionic form usually costs between $25 to $30 for a tiny, four-ounce bottle – an amount that’s barely enough to help fend of even a mild cold or flu.

But owning a new Micro-Particle Colloidal Silver Generator from The Silver Edge allows you to make your own superior-quality ionic colloidal silver for less than 36 cents a quart. Yes, I said 36 CENTS per QUART.

Do you know of any other product that pays for itself virtually the very first time you use it?

It’s quite literally as close as you can come to enjoying free colloidal silver for the rest of your life, because you’re making it yourself for the same tiny cost the big colloidal silver manufacturers make it for before distributing it to health food stores where it’s marked up by a whopping 60,000%! (Learn more here.)

Making your own high-quality colloidal silver this inexpensively allows you to use colloidal silver any time you need, or even give it away to family members, friends or loved ones who need it, without giving cost a second thought.

What’s more, the tiny, sub-microscopic silver particles produced by this amazing breakthrough in colloidal silver-making technology are as low as .8 nm in size. That’s a fraction of a single nanometer.

This is critically important to understand, because even the FDA admits that the smaller the silver particles are, the more bio-available they are, meaning the body is better able to absorb them, utilize them, and afterwards safely excrete them.

Plus, it’s now known that tiny silver micro-particles are able to kill off entire colonies of pathogens with far greater effectiveness than conventional-sized colloidal silver particles.

That’s because of the “zombie effect” described in this recent article about brand new research out of Hebrew University in Jerusalem. As you’ll see, the effectiveness of ultra-small, sub-microscopic silver particles against colonies of disease-causing microbes is absolutely astonishing.

The bottom line is that the tiny, submicroscopic silver particles produced by a new Micro-Particle Colloidal Silver Generator from The Silver Edge are up to 1,000 times more bio-available than conventional silver particles.

Indeed, the human body is able to absorb 90-100% of the tiny silver micro-particles, sending them throughout the body to kill pathogens, and then afterwards excreting them with ease, thanks to their small size.

Perhaps that’s why so many thousands upon thousands of people absolutely rave over the effectiveness of the colloidal silver made with their Micro-Particle Colloidal Silver Generator, as you can see at this web page full of real-life colloidal silver success stories.