Can Colloidal Silver Help You Avoid a Painful Root Canal? 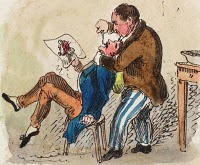 Many colloidal silver users can attest to the fact that they’ve been able to avoid expensive (and potentially painful) dental procedures thanks to their use of colloidal silver. Here’s my story…

I ask the above question out of personal experience.

For nearly 12 years I was able to prevent having a painful root canal procedure done simply by using some homemade colloidal silver several times a day, whenever a flare-up would occur.

Indeed, back in 1996 my dentist had told me that my bottom right molar had a small hairline crack in it, and that microbes were penetrating the tooth and getting into the root system.

This caused an infection resulting in the excruciating pain I had been experiencing. After taking x-rays, he immediately recommended a root canal.

Now this same dentist had performed a root canal on one of my front teeth about six years earlier, and it was one of the most painful procedures I’d ever endured.

It was, in fact, the one and only time I actually screamed out in pain in a professional office surrounding, such was the pain caused by the root canal procedure.

Colloidal Silver to the Rescue!

So instead of having the second root canal done, I went home, made some fresh colloidal silver and started soaking the tooth in it each night. What I did was this:

Upon going to bed each night, I’d take about two ounces of colloidal silver into my mouth, and hold it directly over the offending tooth for as long as I could. I’d shoot for ten or fifteen minutes. While I was doing this, I’d read from a book, or watch television.

Occasionally, I’d forcefully swish the colloidal silver back and forth over the infected tooth, in an attempt to force some of the tiny silver particles under the gum line, and between the teeth, and hopefully even into the hairline crack my dentist told me was there.

Furthermore, I’d repeat the same procedure several times during the day, while I was at work.

It was no big deal. I just brought a small jar of my homemade colloidal silver to work with me. It was about 10 ppm in concentration. And whenever I knew I wouldn’t be talking to anyone at work for awhile –

– I’d take a nice big mouthful of colloidal silver and begin alternately holding it over the tooth, and then swishing it forcefully back and forth over the tooth.

Again, I’d do so for ten or fifteen minutes. And I always swallowed the colloidal silver afterwards.

The pain immediately began to diminish. And within only three days there was no more pain left whatsoever.

Within a week, I went back to the dentist and had new X-rays taken. And you should have seen the look on his face when he saw that the infection was completely gone. Not a trace of it.

Over the years since that event, that same tooth would occasionally flare up. I’d feel a light throbbing pain beginning. And I’d go home and get my colloidal silver out and start repeating the above process.

Nine times out of ten, the pain was gone the same day it started. Of course, I’d continue the procedure for a few days just to make sure. But it always worked. Every single time.

Looking back, I’d have to estimate that the tooth acted up probably once a year. I attributed this to the hairline crack in the tooth allowing bacterial to get down into the root area and colonize.

But each time it happened, I’d use the colloidal silver to eradicate the infection and clear up the problem.

Now that may be too much trouble for some people. Perhaps they’d prefer a root canal procedure, or having their gums scraped, or whatever the case may be. Maybe it would give them some kind of closure. I certainly can understand that.

On a personal level, I’m a minimalist at heart. If I can avoid an invasive procedure, and get pretty much the same results with a simpler and more natural procedure, I will do so every time.

Nevertheless, finally, some 12 years later, I was convinced by another dentist to have the root canal procedure done.

The pain had started up again. And this time my new dentist showed me, using X-rays, that the crack in the tooth had grown. It was clear to me that keeping food and debris out of it had become an impossible task.

She explained to me about the new advances in the root canal surgery itself, in the potency of the numbing agent used, and in more modern endodontic equipment.

And she was right. This root canal was nothing like the first one. There was hardly any pain at all. In fact, I went out to dinner about three or four hours after the procedure.

Nevertheless, I sure am thankful to colloidal silver for the simple fact that I was able to postpone having that procedure for an astonishing 12 years, while dental technology advanced enough for me to have it without pain.

You can learn more about how experienced colloidal silver users are healing infection and disease by reading the in-depth testimonials at this website.

Or, check out the great articles on colloidal silver and it’s usage at the Articles page on www.TheSilverEdge.com