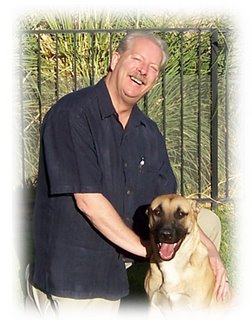 We live on a couple of acres way out in the middle of the southern California desert. And our cat, whose name is Scaredy Cat, is strictly an outdoor cat. He is also a great mouser. But he occassionally gets sick, probably from some of the things he eats when he is on the prowl. (We feed him very well, but from some of the things he’s brought home, you’d think we were starving him.)

We also give it to our dogs when they are sick. We have four large outdoor dogs, a male black Lab, a big red male Chow, a beautiful female German Shepherd (our newest addition), and a male mixed German Shepherd/Boxer.

All of them except for the Shepherd/Boxer were rescued, meaning they had either run away from their homes and gotten lost out in the desert, or their owners abandoned them in the desert and left them to fend for themselves. You wouldn’t believe how many abandoned dogs we’ve come across out here, and have had to find homes for. Once, we found five tiny puppies out in the middle of the desert. They had already been weaned, so it was clear someone had actually driven them out into the middle of the desert away from any houses, and simply left them to die. We rescued them and found good homes for them, of course.

Since there are roving packs of coyotes out here, and summer temperatures can get as high as 115 degrees, lost or abandoned animals don’t last very long. Over the past 14 years we’ve come across a number of dog carcases within just miles of our home in the desert. So when we find a live one, we do our best to find a good home for him (or her). And short of that, we keep them ourselves and take good care of them.

What’s really neat is that all four of our big dogs instinctively know to drink the colloidal silver we set out for them any time they are sick.

It is amazing to put it next to their water bowls, and see that they will go straight to it rather than to their water. It is as if they sense there is something healing in it. That’s probably the only thing Scaredy Cat and our four big dogs have in common.

The black Lab – which we found two years ago – is particularly prone to infections in the winter months. But colloidal silver clears them right up. He is the oldest dog of the four. And when we found him some years back he had tumors (soft and watery, as opposed to hard) on his sides and chest, and was already having trouble with arthritis in his hindquarters, which is common to older Labradors. What we have noticed is that if we give him his colloidal silver regularly, he is able to get out and run with the other dogs when we go on our long walks through the desert together. And his tumors seem to shink up substantially. But if we fail to give him the colloidal silver for a two or three weeks in a row, his back haunches become more arthritic and he has a bit of trouble getting up from a lying position. He is not able to keep up with the other dogs on our long walks. And his tumors actually begin to grow larger.

We always give our animals homemade colloidal silver – made with one of the new Micro-Particle Colloidal Silver Generators – at about 5 to 10 ppm in strength. If they seem really sick, we give it to them straight, i.e., we’ll set out a bowl with about eight to 10 ounces of colloidal silver in it, and let them drink as much as they please at their own pace. From time to time we also mix an ounce or two of 10 ppm strength colloidal silver into their regular quart-sized water bowls. During the hot summer months, we buy small plastic children’s pools for them and fill them with water, so they can drink from them, or even go dip themselves in the water when they get too hot. We usually add a quart of micro-particle colloidal silver to the pool water every week, to keep it free of potentially infective microbes.

I learned about colloidal silver nearly 14 years ago after my wife suffered from a very serious infected toe which the doctors wanted to amputate. You can read the story about how colloidal silver saved the day for her, by going to my web site at https://www.TheSilverEdge.com/. We have been using colloidal silver successfully ever since that time for a variety of infections and illnesses. In fact, we’ve used it successfully for everything from Pink Eye and styes, to sore throats, earaches, food poisoning, colds, the flu, topical skin infections and much more!

Of course, we don’t overdo it and take large amounts daily, like that so-called colloidal silver “blue man” you may have seen recently on television (see previous post on that subject, below). We are very careful to use moderation in every aspect of our nutritional supplementation regimen. And I have long been a very vocal advocate for the responsible usage of colloidal silver.

For my personal usage, I take about an ounce of 10 ppm colloidal silver a day, on average, to keep illnesses at bay and to help boost immunity. And my wife only takes it when she feels a bit under the weather and needs a boost. But she might take as much as four or five ounces a time for a couple of days if she is not feeling well. We have done so for nearly 14 years now with no side effects and no problems. Nothing but positive, and very beneficial results. In fact, though I suffered from chronic fatigue syndrome for many long years before we found out about colloidal silver, I have not had a serious chronic fatigue crash since I first started using colloidal silver nearly 14 years ago.

Because of my personal experiences with colloidal silver, which led to an enthusiastic curiosity about it that later turned into a journalistic crusade, I have helped develop some very fascinating and helpful products for making colloidal silver. And I’ve started a web site about colloidal silver at https://www.TheSilverEdge.com/. There is lots of good information on the web site, and a FREE downloadable colloidal silver “safe dosage” report, too.

I have also written a 547-page book about colloidal silver usage, called The Ultimate Colloidal Silver Manual, which I am happy to say is now the #1 best-selling book on colloidal silver in the world. For more information on it, see https://www.LifeAndHealthResearchGroup.com/.

While you are there, be sure to check out the information on the brand new Colloidal Silver Secrets video, which is available very inexpensively, in both DVD and VHS formats.

And by the way, while you are reading this article, be sure to check out the short, 3-minute video on “How to Operate the New Micro-Particle Colloidal Silver Generator,” at the following link: https://thesilveredge.com/vidclip/