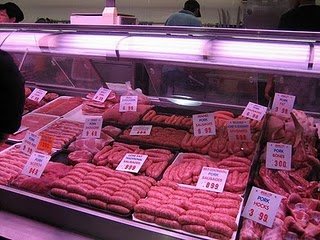 Here’s another great reason to get acquainted with the infection-fighting power of colloidal silver, and to obtain a high-quality home colloidal silver generator for the protection of your family.

As the news article below explains, the deadly MRSA bacteria is now infecting the U.S. meat supply, being especially prevalent in pork and beef products.

Yes, this means every time you prepare pork or beef (and other meats, to a lesser degree) you are literally risking a potentially deadly MRSA infection.

What’s more, the government doesn’t want to test for this deadly, antibiotic-resistant pathogen, because they’re apparently afraid of what they’d find, and of the economic impact it would have on meat producers, distributors and especially the U.S. meat export market were widespread MRSA contamination to be confirmed.

In other words, the risk of you contracting a potentially deadly MRSA infection from handling and eating contaminated meat is not considered to be as important as the money that could be lost by meat producers should it become widely known the meat supply is infected.

Therefore, having a good, high-quality home colloidal silver generator is now an absolute must in every American household.

At the link below, you can learn more about the new Micro-Particle Home Colloidal Silver Generator from The Silver Edge.

You’ll discover exactly why this is now the world’s best-selling colloidal silver generator.

And you’ll learn how to make your own high-quality colloidal silver, quickly and easily, in the comfort and privacy of your own home, for less than 36 cents per quart:

Meat contaminated by a potentially lethal infection is being sold to consumers — creating a public health threat that has largely flown under the the radar due to powerful industry interests and lax accountability at the federal agency in charge of ensuring food safety, according to recent studies and a prominent investigative journalist.

“It makes salmonella look like a picnic,” is how David Kirby, an investigative journalist who has written about MRSA, a life-threatening pathogen, described it in an interview with Consumer Ally.

MRSA (Methicillin-resistant Staphylococcus aureus) is an antibiotic-resistant staph infection that kills about 20,000 Americans – more than the number of people who die from AIDS – each year.

Previously associated mostly with infections acquired in hospitals, nursing homes or by people with compromised immune systems, for the past 15 years MRSA is increasingly being traced to industrial animal feeding operations, so-called factory farms, where much of the nation’s protein comes from.

A number of clinical and academic studies bear this out:

A recent Canadian study showed nearly 14% of pork chops (about one in seven) and 6.3% of ground pork sold in supermarkets carried the contamination – taken together, 9.6% of all pork samples.

Additionally, 5.6% of the beef and 1.2% of the poultry carried the bug. The bacterium was also found in veal, lamb and other meats.

Another report, by Louisiana State University, found 5.5% of pork samples and 3.3% of beef samples taken from local supermarkets were contaminated.

Yet another – this one out of the pork industry’s lobby arm, the National Pork Board — found MRSA in 3% of pork samples.

…So with MRSA approaching such dangerous proportions, why isn’t a federal agency looking into the problem?

While some controversy exists about the particular strains of the infection and the likelihood that not all MRSA-contaminated meat is linked to the way the animals were raised, the U.S. Department of Agriculture, which oversees the meat industry, does not mandate or carry out any rigorous testing for MRSA in meat, nor does it issue recalls.

“I don’t think the USDA wants to touch this. They know if they start testing for MRSA, they’re going to find infected pork and that will force them to make a decision, one that would hugely impact the meat export industry,” said Kirby, who has hit a brick wall when trying to get answers from the agency.

Kirby is the author of Animal Factory: The Looming Threat of Industrial Pig, Dairy and Poultry Farms to Humans and the Environment, in which he says the meat lobby enjoys unrivalled access to government.

“It would be very cumbersome and the industry doesn’t want it. So they just prefer not to deal with it, and in the meantime the FDA doesn’t have to deal with it,” he says.

The FDA does not have jurisdiction over meat products, but it can and is soon likely to regulate the prophylactic use of antibiotics, such as for growth promotion and disease prevention. Outside the U.S., Holland, Switzerland, and Egypt already test for MRSA in retail pork.

“The Food Safety Inspection Service is aware of and takes seriously the concerns related to MRSA and other emerging food safety threats. [We] have formed a work group to develop a risk profile for MRSA that will be used to guide potential future actions related to this matter,” said a spokesman for the FSIS, the public health unit of the USDA, in an e-mail to Consumer Ally.

Scientists and animal advocates agree that the presence of MRSA and other drug-resistant “superbugs” in large-scale feeding facilities spring from the routine feeding of antibiotics to livestock.

About 100,000 Americans die each year after struggling with antibiotic-resistant infections, according to the Center for Disease Dynamics, Economics and Policy, a public interest think tank.

With nearly 70% of antibiotics sold in the U.S. being used in factory farms, the findings add to already urgent questions about how animal-derived food in America is raised and brought to market.