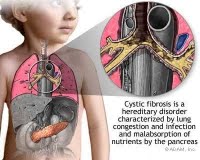 In the excerpts below from a medical study published in the Journal of the Royal Society of Medicine (2008: 101: S51–S52. DOI 10.1258/jrsm.2008.s18012)we see some very strong evidence indicating that colloidal silver may turn out to be a successful treatment for the debilitating chronic lung infections associated with Cystic Fibrosis (CF).

In this particular case, a young boy was first diagnosed with Cystic Fibrosis at age two, and over the ensuing nine years grew worse and worse in spite of intensive medical treatment.

By the time he was 11, physical exertion left him struggling for breath due to the severity of his lung infection and his condition had deteriorated to the point that his doctors referred him for heart/lung transplant assessment.

Because doctors had documented serious infections in the boy’s lungs, and because aggressive IV antibiotic therapy administered by the boy’s doctors had proven to be futile, his parents began to look into alternative remedies for the infection.

On the internet, his parents found information about colloidal silver and began treating their son with small daily amounts, approximately 1/2 teaspoonful, twice a day.

According to the study authors below, “Over the next three months the patient achieved a sustained improvement in symptoms, which persisted following weaning from oral steroids, nebulized antibiotics and regular asthma medications.”

In other words, thanks to the success of the colloidal silver usage, the boy’s parents were able to start weaning their child off of the harsh prescription antibiotic drugs.

The boy enjoyed what his doctors called “a sustained improvement in symptoms,” and was able to enjoy a skiing holiday, full participation in school rugby matches and even “significant improvements in his golf handicap.”

In other words, the boy went from being barely able to breathe, to returning to an almost normal, active boyhood life!

The child apparently had one further relapse after experiencing a “temporary interruption of colloidal silver [usage] for a month.” Then, according to the doctors, “He has remained well for a further six months after resuming colloidal silver, with no other changes in his routine care.”

The doctors, of course, are duly cautious about recommending colloidal silver usage for Cystic Fibrosis patients, even though it was they who documented the child’s startling recovery from the severe symptoms of the disease.

Nevertheless, the case represents another pointed example of what colloidal silver users have been saying for decades, i.e., Colloidal silver kills many infections better than prescription antibiotic drugs.

For example, you can read my wife’s story of how colloidal silver usage saved her toes from surgical amputation when she contracted osteomyelitis, a serious bone infection, back in 1994. She too had been aggressively treated to no avail with antibiotics, including IV antibiotics, before discovering colloidal silver.

What’s more, numerous studies have demonstrated the effectiveness of colloidal silver against a variety of serious viral infections, too.

And a recent study documents colloidal silver effectiveness against fungal infections, even demonstrating it to be more powerful than two of the most popular prescription anti-fungal drugs.

Colloidal Silver is Readily Available, Or Make It Yourself for Pennies Per Quart

Colloidal silver is readily available at health food stores across American for about $20 to $30 for a tiny four-ounce bottle.

For example, thousands of people around the world use the brand new Micro-Particle Colloidal Silver Generator from The Silver Edge, which allows them to make high-quality micro-particle colloidal silver for about 36 cents a quart.

You can watch a video of how it works, here.

The medical monopoly continues to shun colloidal silver usage in favor of their own orthodox treatments and prescription drugs. Some news reports even claim that there is no medical evidence for the effectiveness of colloidal silver against infections and disease, in spite of all of the published studies which prove such a ludicrous assertion to be untrue. The truth is, medical study after medical study continues to confirm the amazing infection-fighting power of this safe and highly-effective all-natural substance.

Excerpts from “Colloidal silver for lung disease in cystic fibrosis”

Cystic Fibrosis (CF) families commonly consider alternative or complimentary therapies of questionable value. We report the case of a 12-year-old boy with severe CF lung complications who was treated by his family with colloidal silver.

Aged three he developed pseudomembranous colitis requiring prolonged intensive care. Aged six he developed severe, steroiddependent, relapsing allergic broncho-pulmonary aspergillosis (ABPA) and right mid-zone bronchiectasis. Atopic asthma also proved increasingly problematic, with evidence of sensitization and wheezing in relation to several aeroallergens, including house dust mite and cat. He had a significant step up in FEV1 after a trial of rhDNase (pulmozyme) and this drug was added to his treatment regime.

Spirometry plateaued around 60%, with frequent deteriorations caused by wheezing episodes and infective exacerbations. Aged 10 his FEV1 deteriorated to 40% predicted with severe episodic wheeze. A Brompton referral was made to consider monthly IVIG therapy (not given) and regular IV antibiotics and aggressive ABPA treatment were recommended.

Aged 11, the patient isolated Burkholderia multivorans and Stenotrophomonas maltophilia. Pulmonary status deteriorated to an FEV1 of 24%.

In March 2006, he was treated with prolonged IV and oral antibiotics, steroids and antifungals. Lung function recovered to around 40% but he remained markedly symptomatic, with persistent cough, breathlessness and wheeze after physical activity. Because of these complications he was referred for heart–lung transplant assessment.

At the same time, the family discovered websites promoting colloidal silver for CF and purchased the product from their local health food shop. They independently commenced 2.5 mL b.i.d. of the solution in July 2006.

Over the next three months the patient achieved a sustained improvement in symptoms, which persisted following weaning from oral steroids, nebulized antibiotics and regular asthma medications.

He remained well for a year, enjoying a skiing holiday, full participation in school rugby matches and significant improvements in his golf handicap. He required only one further course of IV antibiotics until a recent deterioration coinciding with temporary interruption of colloidal silver for a month.

Whereas sputum samples had consistently isolated B. multivorans before receiving silver, there had only been one further positive isolate during the year when he received it. He has remained well for a further six months after resuming colloidal sliver, with no other changes in his routine care.

…In our case we have documented significant improvements in well-being that were temporally associated with the use of the drug [i.e., colloidal silver –ED]. However, this is a single anecdote and caution should be used in interpreting the significance of these observations.

If there was a direct clinical effect of the silver we speculate that this might have been as a result of a bactericidal action on CF pathogens, as suggested by the decreased occurrence of B. multivorans on sputum cultures. Researchers in Denmark have shown that silver is highly effective as a bactericidal agent against biofilm and planktonic models of Gram-negative organisms, including P. aeruginosa.

Currently there is no evidence to support the use of silver products in CF but their potential benefits might be worthy of further exploration. An American study has shown benefits for silver in the treatment of Burkholderia dolosa infection in a murine model of severe lung sepsis.

Further in vitro studies of the effects of silver on the organisms within CF sputa and a better understanding of safe dosaging are essential first steps in exploring the potential for this use of this treatment option.