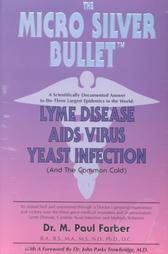 Dr. M. Paul Farber is widely credited with bringing the powerful qualities of colloidal silver against Candida yeast infections and Lyme Disease to the attention of the general public, in the 1990’s.

In his book, The Micro-Silver Bullet, he goes into great detail regarding his battle against Candida yeast infection and Lyme Disease, which he was able to cure using a form of colloidal silver called Mild Silver Protein (i.e., silver particles bonded to a protein stabilizer).

While we are not big fans of silver protein preparations – chiefly because more recent medical studies have demonstrated the fact that free silver particles have greater effect than do silver particles bonded to another substance – Farber’s story nevertheless offers many great insights into the powerful infection-fighting qualities of silver.

Here is a synopsis of his story, written in his own words:

“In July of 1992 I was bitten by the Deer Tick (Ixodes Scapularis) which according to Dr. Thomas Craig, D.V.M. of the Department of Veterinary Microbiology and Parasitology carries the Spirochete which is the causative agent of Lyme disease.

After my diagnosis was confirmed a medical doctor, who is a neurologist, put me first on Penicillin orally for two weeks, and then intravenously for four weeks. The results to my symptomatology were minimal and I experienced many side effects including Candida Yeast Infection because of the penicillin’s destructive effect on the friendly acidophilus bacteria in my stomach and colon.

Since this treatment did not work, the neurologist prescribed a cephalosporin called Rocephan. Unfortunately, this treatment accomplished no more than the penicillin, had many unpleasant side effects, and worsened my candida yeast infection.

I began with two tablespoons a day for the first month holding it under the tongue sublingually for a minute, swishing it around the mouth for ten seconds, and then gargling and swallowing. I did the same thing for the second and third month, but only one tablespoon per day.

After 3 months of treatment I was 100% well. I have been 100% well for over 2 years. Was I cured from Lyme disease and candida yeast infection?

In my opinion and the opinion of Dr. William Burgdorfer, Scientist Emeritus who discovered the spirochete as the causative agent of Lyme disease, and Dr. John Parks Trowbridge, M.D. an author and expert in the field of candida yeast infection, I appeared to be CURED.

Dr. Burgdorfer, who became a close friend, then shared with me that the world would not believe my results without scientific documentation.

It seems that there is enough testing from universities, and reports from practitioners that the Mild Silver Protein* not only works on Lyme disease but a good deal more bacterial, viral and fungal infections.”

Dr. Farber went on to conduct extensive scientific research on colloidal silver (i.e., the mild silver protein form) at Temple University, eventually writing his well-known book, The Micro-Silver Bullet, documenting both his personal experiences and his studies on the powerful antimicrobial effects of silver.

Farber’s book is quite dated now. And some have complained over the years that it contains too much information about his religious views. Nevertheless, it is a good read for those who want to know about some of the early research on colloidal silver, candida yeast infections and Lyme Disease, and one man’s successful battle against these debilitating diseases.

Farber’s The Micro-Silver Bullet is often available on Amazon.com for those who may want to obtain a copy.

If you are new to colloidal silver usage, and would like a great 60-minute video overview, including hands-on demonstrations for making and using
colloidal silver at home, consider an inexpensive copy of the brand new Colloidal Silver Secrets Video, at www.ColloidalSilverSecretsVideo.com

Or, for in-depth information on colloidal silver usage that is absolutely encyclopedic in scope – including three full chapters of specific dosage information for specific diseases – you might want to consider getting a copy of the newly updated, 547-page book, The Ultimate Colloidal Silver Manual, available at www.UltimateColloidalSilverManual.com.

Finally, be sure to check out www.ColloidalSilverCuresMRSA.com for information on the four new medical studies documenting colloidal silver’s phenomenal effectiveness against the dread new antibiotic-resistant MRSA pathogen, which is now causing over 90,000 new infections in the U.S. each year, and resulting in more deaths annually than the AIDS virus.