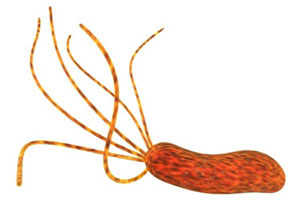 The H. pylori bug that causes nausea, bloating, chronic heartburn, gastritis, gastric ulcers, duodenal ulcers and even stomach cancer is one of the most common stomach bugs in the world, and also one of the most stubborn.

More than half the world’s population is said to be infected by it. And 80% of the people infected have no overt symptoms for years. Worse yet, the pathogen is so hardy even prescription antibiotic drugs often fail to eradicate it when symptoms appear.

I’m frequently asked if colloidal silver is effective against H. pylori, the pesky, difficult-to-eradicate stomach bug know to cause chronic heartburn, ulcers and other stomach problems.

However, one interesting study conducted in the 1950’s demonstrated that an oral colloidal silver product (i.e., colloidal silver oxide) was a highly effective treatment for peptic ulcers. Indeed, it cured ulcers in only nine days!

Keep in mind, this study was conducted several decades before medical science discovered that H. pylori is one of the most common causes of peptic ulcers!

In other words, the only thing the researchers could conclude from their study was that the colloidal silver product healed the ulcers. They most likely didn’t realize the silver was attacking the root cause of the ulcers, meaning the H. pylori bacterium!

On the TurnAroundYourHealth.net web site under the section on treating H. pylori, it says:

“Taking 1 teaspoonful of colloidal silver 3 times a day for 3 weeks is a well known and effective treatment for H. pylori without the use of antibiotics.”

And I found this confirming testimonial posted elsewhere on the internet recently:

“I was taking antibiotics frequently, for H pylori bacteria in my stomach. After each course of antibiotics, I used to feel good for some time. Then again I start feeling too much of gas in stomach and heart burns.

I checked on the internet for a natural antibiotic, and came across lots of colloidal silver sites. I bought a bottle of 5ppm colloidal silver from a health store and started taking one teaspoon three times a day.

After about a week, all my symptoms of excessive gas in the stomach and heartburn is almost cured. I am happy, that colloidal silver has worked for me. Now I am taking it daily.”

So that’s some very good news. Anecdotally, anyway, it seems that some people are having great success treating their H. pylori infections with small amounts of colloidal silver!

The Key to Success?

A gentleman from Colorado supports the above claim. He says he spent 12 years in a laboratory researching the uses of colloidal silver, and that one of the more difficult projects he was involved with was its effect on H. pylori.

He claims to have discovered that the key to success to beating an active H. pylori infection was in using colloidal silver on an empty stomach, at least three times a day:

“The trick is to take about 1 ounce on an empty stomach three times per day for about a week.

But when we tested it by itself, on an empty stomach, three times per day, it dropped the H. Pylori titer down to un-measurable. Even months later.

I have since used it on a few friends with ulcers and it has dumb-founded the folks at the hospital because when they use the endoscope and see the ulcer and then the titer comes back for negative H. Pylori, they just shake their heads.

Then… of course, the ulcers heal very quickly and everyone is happy.”

Unfortunately, some people have written me to say that colloidal silver did not help them at all with H. pylori. As one of them recently wrote to me:

“I took colloidal silver daily, for six weeks straight. It had no effect whatsoever on my H. pylori symptoms.”

It’s very frustrating, of course, when you get mixed results from users, because you don’t know if the ones who experienced no relief at all were simply using a lousy brand of colloidal silver, or were not taking enough, or were taking it in combination with foods, or had stomach problems in addition to H. pylori that they didn’t know about.

According to the Immunogenic Research Foundation, sub-species of 20 different pathogens have been shown to “exhibit various degrees of resistance to the bactericidal effects of silver-based drugs.”

Unfortunately, among these 20 silver-resistant pathogens is a sub-species of H. pylori.

While it’s extremely rare for a pathogen to be resistant to silver, it can happen. So it’s quite possible that some people who fail to experience positive results when taking colloidal silver for H. pylori are infected with a rare, silver-resistant strain of the pathogen.

One person recently called to say he had an H. pylori infection that had been causing peptic ulcers.

He told me that by taking colloidal silver three times a day with the popular over-the-counter heartburn remedy, Pepto-Bismol, he had cured himself of the H. pylori infection, and his peptic ulcers healed up as well!

That’s fascinating to me, because ever since doctors figured out that peptic ulcers are being caused by bacterial like H. pylori, they’ve began prescribing antibiotic drugs such as Flagyl and Amoxillin in combination with the gut-healing mineral bismuth.

The antibiotic drugs are prescribed to kill the H. pylori pathogen, of course. And the bismuth is prescribed to help soothe and heal the ulcers.

Of course, as most people know, bismuth is the main ingredient in Pepto-Bismol, the famous gut-soothing over-the-counter remedy for heartburn, diarrhea, and more.

So for cases of peptic ulcer and heartburn, combining a little bit of colloidal silver (for its antimicrobial benefits) with a little bit of Pepto-Bismol (for its bismuth content) seems like a no-brainer to me.

And thankfully, combining the two has worked like a charm for some people, as I documented last year in my article Update to Colloidal Silver and Ulcers Post.

Indeed, I was able to heal my own chronic heartburn – which can also be caused by H. pylori infection– by filling a shot glass half-and-half with Pepto-Bismol and colloidal silver, and drinking it down three times a day on an empty stomach.

While there’s no way to tell without blood tests, endoscopy or a clinical study whether or not the colloidal silver is actually killing the H. pylori pathogen and the Pepto-Bismol is healing the inflammation, it sure seems like this could be the case.

I’ve also read that some people have had success against H. pylori using a combination of colloidal silver and the spice, turmeric.

From what I’ve read, they take the turmeric orally in the form of commonly available tablets from the health food store, using the dosage recommended on the label. And they simply wash it down with an ounce of colloidal silver each day.

Turmeric is highly antibacterial, of course. And taking it with colloidal silver apparently provides a nice, one-two punch against H. pylori. (Some people have recommended this combination for internal MRSA infections, as well.)

Check With Your Doctor

Naturally, with stomach ailments you should always check with your doctor in case anything serious is going on.

These are just some of the ideas I’ve heard over the years that have worked for other people battling against H. pylori infections. If you try any of these ideas, and they work for you, please let me know.

To learn more about making and using colloidal silver, just click the link. Meanwhile, I’ll be back next week with another great article!