Colloidal Silver and Colds: A Safe, Simple and FAST Way to Stop Colds Before They Get Started! 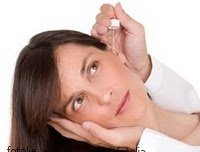 Dr. Mercola once recommended putting a couple of drops of standard household 3% hydrogen peroxide into your ears, using an eyedropper, the moment you feel a cold or flu coming on.

His rationale was that many viral infections actually start in the ears, and then spread. And that hydrogen peroxide could halt the process at its inception by killing the viruses before they spread throughout the respiratory tract.

This idea was apparently based on the work of Richard Simmons, M.D., who, way back in 1928, first hypothesized that colds and flu virus enter through the ear canal.

So…the very next time I felt a cold coming on, I tried this idea at bedtime. I put three drops of hydrogen peroxide in my ears, one ear at a time. I could hear and feel the peroxide bubbling like mad in my ears.

And the very next day all cold symptoms were gone! The key, apparently, is that you have to catch the cold just as it is beginning. Once it’s full-blown and the viruses have spread into the respiratory system, it’s too late.

But…I discovered there was a potential PROBLEM with this method…

…For several days after using the hydrogen peroxide drops in my ears, I got the distinct impression that it had slightly burnt the soft tissue on the inside of my ears and even diminished my hearing a bit. The slight stinging feeling eventually subsided. But…

Using Colloidal Silver in the Ears, Instead…

…The next time I felt a cold coming on, I used COLLOIDAL SILVER in my ears, instead of hydrogen peroxide. I used three drops of 10 ppm homemade colloidal silver in each ear.

Here’s what I did:

I simply laid down on one side, and used an eyedropper to administer the three drops. Then I waited six to eight minutes and turned over and drained the colloidal silver into a tissue.

Then I laid down on my other side and repeated the process in the other ear. Wow…

…what a difference! No burning or stinging sensation whatsoever. In fact, it was remarkably soothing, instead. No perceptible hearing loss afterwards. And once more the budding cold was knocked out before it could fully take hold.

It’s an interesting and very simple remedy – much safer, in my opinion than the use of hydrogen peroxide in the ears.

And since that time I’ve used it successfully many, many times to stop fledgling colds from becoming full-blown colds.

Works great on kids with symptoms of a fledgling cold, too!

Do YOU Have Any Unusual Uses for Colloidal Silver?

There are many other unusual uses for colloidal silver discussed at the Colloidal Silver Success Stories web site.
Or you can find more at the Testimonials page at The Silver Edge web site.

How about you? Do you have any unusual ways to use colloidal silver?