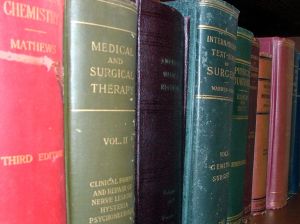 What the naysayers always fail to state is that there’s a very good reason for the dearth of modern medical and scientific research on behalf of colloidal silver:

The medical community has simply refused to conduct any significant new large-scale research on colloidal silver since the first patented antibiotic drug (penicillin) came into widespread medical usage in 1940.

In fact, since the advent of prescription antibiotic drugs, the medical community has not conducted any significant medical research on any natural substances with infection-fighting qualities, except for those they could synthesize and turn into patentable drugs.

In short, even though colloidal silver was widely used by doctors and enthusiastically studied for its infection-fighting properties prior to 1940, directly after the advent of prescription antibiotic drugs colloidal silver quickly became the “red-headed stepchild” of the medical research community.

… and a number of studies conducted by foreign researchers, or by cutting edge medical and scientific researchers who have bucked the American medical establishment and conducted independent research on their own (see discussions of many of these studies at Colloidal Silver Kills Viruses and Colloidal Silver Cures MRSA)…

…colloidal silver has been largely ignored by the medical research community in this country since 1940.

Prescription antibiotic drugs have become the de facto mainstay of modern medicine in regards to treating infections, in spite of the fact that researchers admit medical science is now losing the battle against infectious microorganisms.

Medical Research Before 1940:
the Evidence for Colloidal Silver is Overwhelming

Another thing the medical bureaucrats and colloidal silver naysayers don’t like to tell you is that when they say there is “no medical or scientific evidence” of efficacy for colloidal silver, what they’re talking about is modern medical research.

It is true that they have effectively quashed modern research into the use of colloidal silver.

But what they omit is that some of the very best medical and scientific research on colloidal silver was conducted prior to the 1940 advent of penicillin.

When you look back on the old pre-1940 medical literature, you’ll find that a wide range of infectious microorganisms and ill-health conditions were routinely treated by the medical community using colloidal silver. This, of course, was due to the incredibly broad-spectrum infection-fighting and immune-boosting qualities of silver itself.

The following is a list of pathogens and medical conditions documented before 1940 in which patients were successfully treated using colloidal silver.

Spellings have been left as they appeared in the old medical texts. And you’ll find a Bibliography of medical citations and other documentation at the end of the list:

More recent articles have described silver being used to treat the following:

The following is a documented list of silver resistant bacteria: